Skin cancers are named for the type of cells that become cancerous.

The two most common types of skin cancer are basal cell cancer and squamous cell cancer. These cancers usually form on the head, face, neck, hands, or arms – areas exposed to the sun, but skin cancer can occur anywhere.  A third type of cancer is melanoma.  While relatively uncommon, it is important to watch for.  If left untreated, melanoma can be fatal. 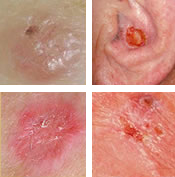 Basal cell carcinoma is the most common form of skin cancer, with more than 1 million cases diagnosed in the US annually. BCC arises in the basal cells, which line the top layer of the epidermis or top layer of skin. 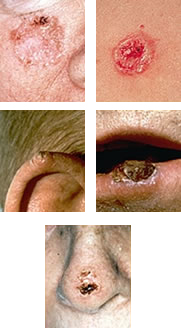 Squamous cell carcinoma is the second most common form of skin cancer with more than 700,000 cases diagnosed in the US annually.  SCC arises in the squamous cells, which make up the skin's upper layers.

Melanoma is a rare form of skin cancer, but it is the most lethal.  Melanoma is a malignant tumor that originates in melanocytes, the cells that produce the pigment melanin which colors our skin, hair and eyes.

There are four types of melanoma.  Three types are in situ, meaning they occupy only the top layers of the skin, and one type is invasive from the start. The types include:

Pre-Cancers
Sometimes a lesion is biopsied and diagnosed as a pre-cancer.  There are two common types of pre-cancers, and while they are not cancer, they may turn into cancer if not treated.

Actinic keratosis is a type of flat, scaly growth on the skin. It is most often found on areas exposed to the sun, especially the face and the backs of the hands. The growths may appear as rough red or brown patches on the skin, or as cracking or peeling of the lower lip that does not heal. Without treatment, a small number of these scaly growths may turn into squamous cell cancer.

Bowen's disease is another type of scaly or thickened patch on the skin that may turn into squamous cell skin cancer.